Harvest Report 2022: From the Winemaker’s Mouth

This harvest season resulted in a great vintage, with the wines showing a lot of promise. The harvest gave us opulent reds with good extract and great tannin structures, and for the whites, it offered wines of full body and flavour.

Above-average winter rainfall as well as sufficient cold units ensured that the vines had the perfect hibernation period and a good accumulation of reserves. Even budding occurred during the springtime, leading to homogenous shoot growth which is great for the quality of the grapes. The winter rains continued late into the spring, making disease control tricky, and we had to be on top of our game to prevent any occurrence of mildew.

In November we had a huge thunderstorm that fixed nitrogen into the soil, which added to the vigour of the vines. Good canopy management was needed to prevent diseases and aid wine quality through light penetration. December was cool, with a few warm days helping to speed up ripening after such a slow, cool ripening season.

A cool January and early February delayed final ripening by two weeks, and the first Sauvignon Blanc and Chardonnay grapes were packed with flavour and high natural acidities. From middle to late February we experienced two heatwaves, and to save the bunches from the negative effects of the heat and sun (the loss of flavour and acidity), we chose not to break out leaves on the white cultivars. We prioritised flavour – and waited for the flavour to return after the heat. This led to slightly higher alcohol levels and lower acid levels on the white wines, which had to be adjusted and raised in the cellar. The result was full-bodied and flavoursome whites that are showing a lot of promise.

A good berry set and even ripening benefited the red cultivars; the cool season aided phenolic ripeness and the heatwaves resulted in the raising of sugar levels to a satisfactory level for harvesting at the right time. With the early cultivars (Pinotage) ripening later than usual, the heatwaves in February pushed the later cultivars (Merlot and Cabernet Sauvignon) forward, and we had a cellar brim-full of both early and late cultivars, which caused some logistical issues to overcome! Thanks to a concerted team effort, we managed to pull it off.

All the wines, both whites and reds, are now safe in the tank or barrel, and the work continues as we monitor them closely. We expect more positive developments to come with this vintage, so watch this space as we share updates on these beautiful 2022 estate wines. 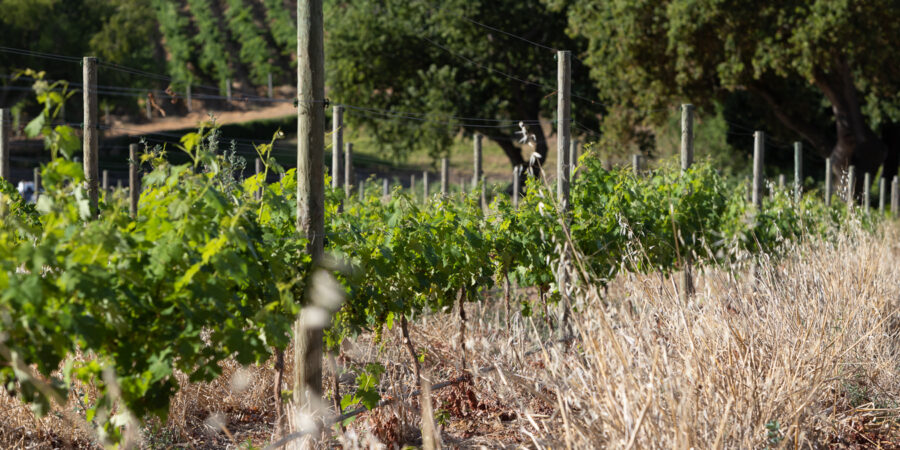 During the winter months, above-average rainfall and sufficient cold units ensured a perfect hibernation period for the vines and a good accumulation of reserves. The winter rains actually continued late into spring, which made disease control a bit of a challenge, and meant that we had to be on top of our game to keep any hint of mildew far from the vineyards.

Springtime was characterised by even budding that led to homogenous shoot growth ¬– which encourages great quality of grapes. November (early summer) brought us a huge thunderstorm, flooding the soil with nitrogen and resulting in heightened vigour of the vines. During this time, we focused on good canopy management to prevent diseases and enhance wine quality through light penetration.

December was cool, but fortunately delivered a few heatwaves to help speed up ripening after such a slow, cool season. The crop volume is now wonderfully balanced and offers great promise of an excellent vintage from the estate. 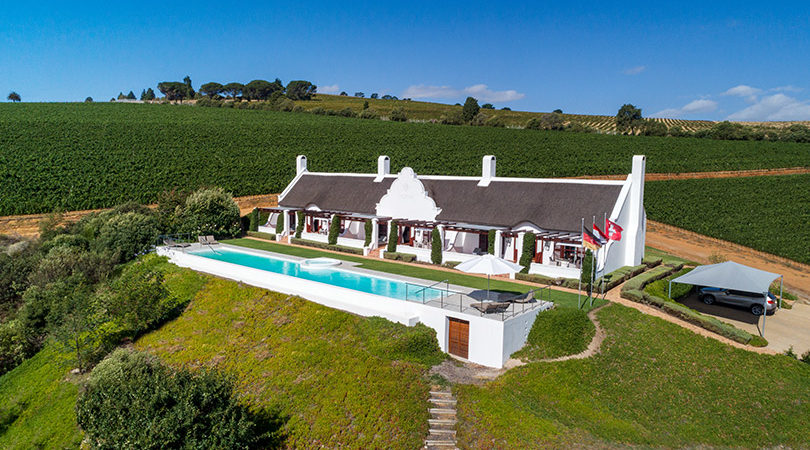 With travel opening up and the warm weather around the corner, it’s time to book your holiday accommodation for the 2021/2022 season. A relaxing stay at the Aaldering Estate – in one of our three, gorgeous 5-star lodges – offers the perfect, peaceful break in one of South Africa’s most picturesque regions.

Our luxury lodges are generously sized (100m2) and come with an in-room iPad, free Wi-Fi, impeccable service and creature comforts. We also offer a pillow menu, laundry and car wash services, concierge assistance, spa treatments on request and much, much more.

South Africa is a very spacious country. Social distancing, needed or not, is extremely easy here and especially so in the spacious Cape Winelands.

At Aaldering Vineyards we carefully cater for your privacy and social distancing needs. The tourist-friendly Western Cape also offer good weather, allowing you to enjoy lunch and dinner on spacious terraces, where all guidelines are strictly adhered to – keeping guests safe.

END_OF_DOCUMENT_TOKEN_TO_BE_REPLACED 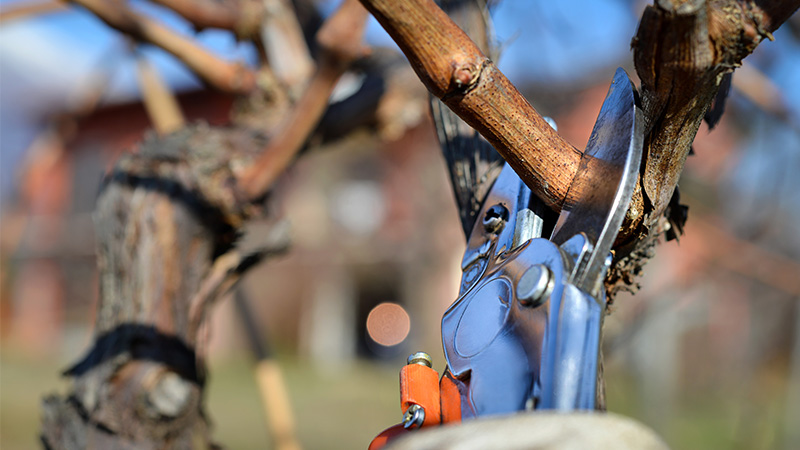 We have been blessed with an unusually cold winter this year, and the majestic Stellenbosch mountains have been capped with snow for quite a few days now. Above average rainfall (298 mm in the winter months) has filled up our dam and saturated the vineyard’s soils. The vines are sleeping and not a leaf is visible. Like skeletons of their summer growth, they lie and wait for the warmer temperatures of spring to bud and start their process of rebirth.

It’s a less manic time of the year in the vineyard, but there are still crucial tasks at hand. END_OF_DOCUMENT_TOKEN_TO_BE_REPLACED 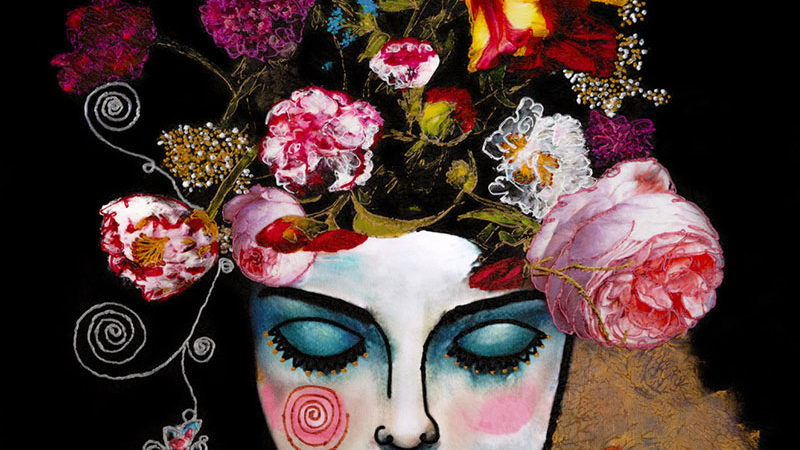 This season, Aaldering Vineyards & Wines is launching a magnum Pinotage Rosé. And, for the first time, we have opted for a transparent glass bottle so that the bright colour of this rosé is beautifully visible. The wine is themed – another Aaldering first – specifically around the concept “Women of the World”. This theme has been translated into a colourful painting by Dutch artist Maureen Knobben. END_OF_DOCUMENT_TOKEN_TO_BE_REPLACED 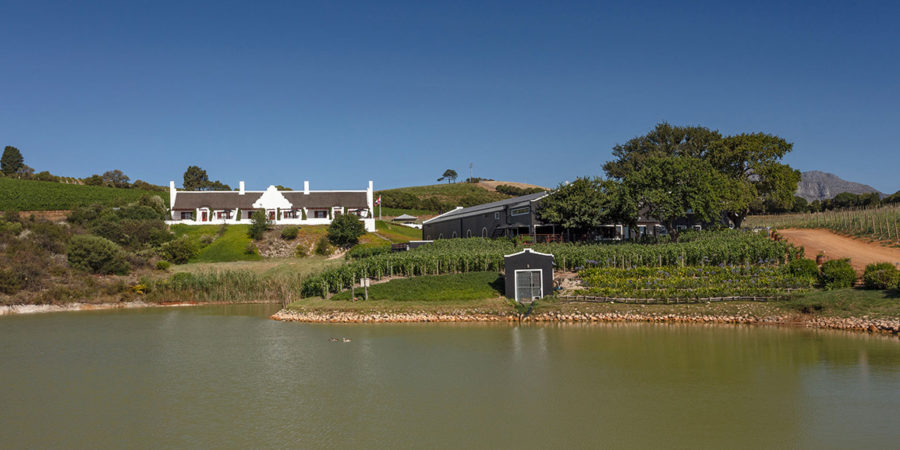 After the severe drought of 2018, the following year brought us a good old-fashioned Cape winter: cold and wet. Thanks to Mother Nature’s bounty, the vines built up sufficient reserves for the growth season. And even the budding season – from September 2019 till January 2020 – was colder than usual, which laid the foundation for good natural acidity and optimal phenolic ripeness in the grapes. END_OF_DOCUMENT_TOKEN_TO_BE_REPLACED 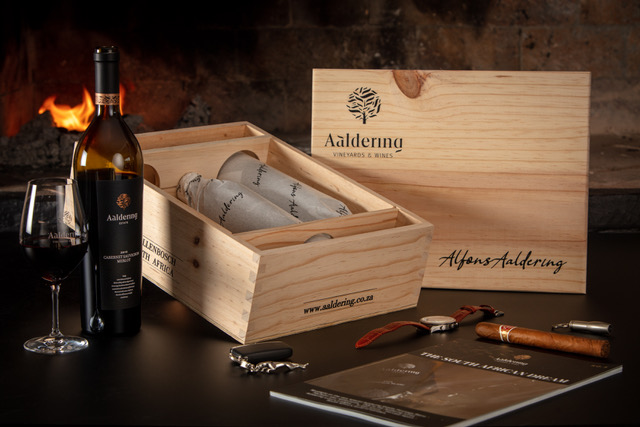 After 15 years of dedication and passion for creating high-quality wines, and numerous awards under our belt, Aaldering Wines has carefully crafted a unique wooden box to serve as the packaging of our flagship wines.

END_OF_DOCUMENT_TOKEN_TO_BE_REPLACED 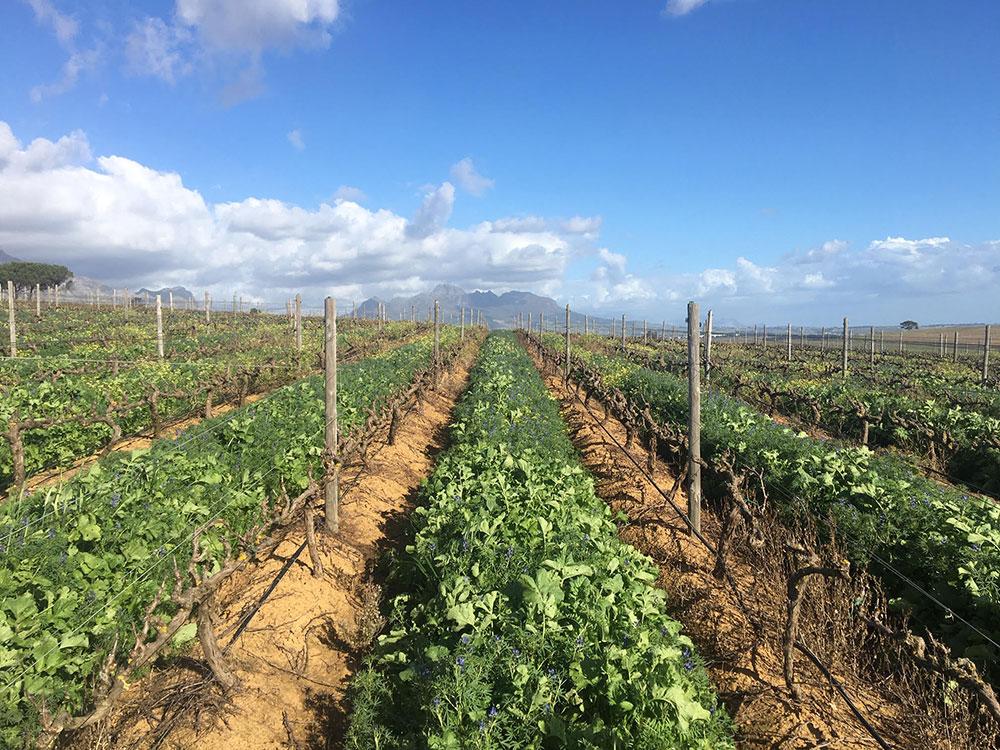 THE WONDERS OF COVER CROPS

There are few things more beautiful to a viticulturist’s eye than a neatly pruned vineyard in the middle of winter, with a good stand of cover crop between each row. A good, winter cover crop programme is essential in controlling weeds, improving the soil structure and even in building up the soil nutrient levels as well as beneficial soil microbes.

END_OF_DOCUMENT_TOKEN_TO_BE_REPLACED

Our estate is well-known for our Pinotage, and we take great pride in maintaining – and exceeding – our standards when working with this unique South African varietal. So we are very pleased to bring you the 2018 vintage, a beautiful exemplar of Pinotage named “Outstanding” by Wine Advocate (USA) and rated “Platinum” (95+) on the SA Wine Index.

The 2017 growing season that produced this vintage was marked by severe drought in our region, but this gorgeous wine is evidence of the proverbial silver lining! The cool, dry year and long winter nights ensured a longer period of ripening, which in turn enhanced minerality and added finesse to the vintage. The drought also caused the vine to send its roots deeper in search of water, and this is always a good thing for the future hardiness of the plant.

END_OF_DOCUMENT_TOKEN_TO_BE_REPLACED

The harvest this year was bookended by unusual events outside of our control: A cooler than normal December and January meant that we started a week later, and the national lockdown announced in March meant that we harvested the last varietal in just two days. The results were exceptional.

Harvest started late, on the 30th January, because of these summer cool spells. This was, in fact, good news! It led to a higher natural acidity in the white wines as well as the Pinotage. The Pinotage was picked earlier and at a lower sugar content – to make our Pinotage blanc and Rosé wines. An anomaly was the fact that Chardonnay ripened earlier than the Sauvignon blanc and was harvested first.

The growth season had been abnormally wet, with quite a few days recording more than 10 mm rainfall and high humidity – the perfect conditions for downy and powdery mildew. We were blessed to escape such diseases, while the rest of the industry struggled with fungal infections and ensuing grey rot of the berries, with the very susceptible Chardonnay badly affected.